We are providing access to the northwest United States (US) and southwest Canada 30-second climate, bioclimate, and biome data produced by the USGS EFFECTS Project via our Thredds catalog and Regional Climate Downloader web application.

Fine spatial resolution data of potential future climate and vegetation changes are important for understanding the potential impacts of climate change in regions of topographic complexity, such as the northwest US and southwest Canada. These data also are needed by natural resource managers for developing adaptive management responses to climate change. We downscaled climate data onto a 30-second grid of the northwest US and southwest Canada and used these data to calculate a set of bioclimatic variables. The climate data also were used as input to LPJ (Sitch et al. 2003), a dynamic global vegetation model, to simulate potential future vegetation changes for the study area.

All of the data available here were developed for use in scientific research and as input for numerical models (e.g., vegetation models). They are based on estimates of historical climate and climate model simulations of future climate and thus they are projections, not predictions, of potential future climate, bioclimate, and vegetation changes.

Figures and animations displaying some of these data are available here. 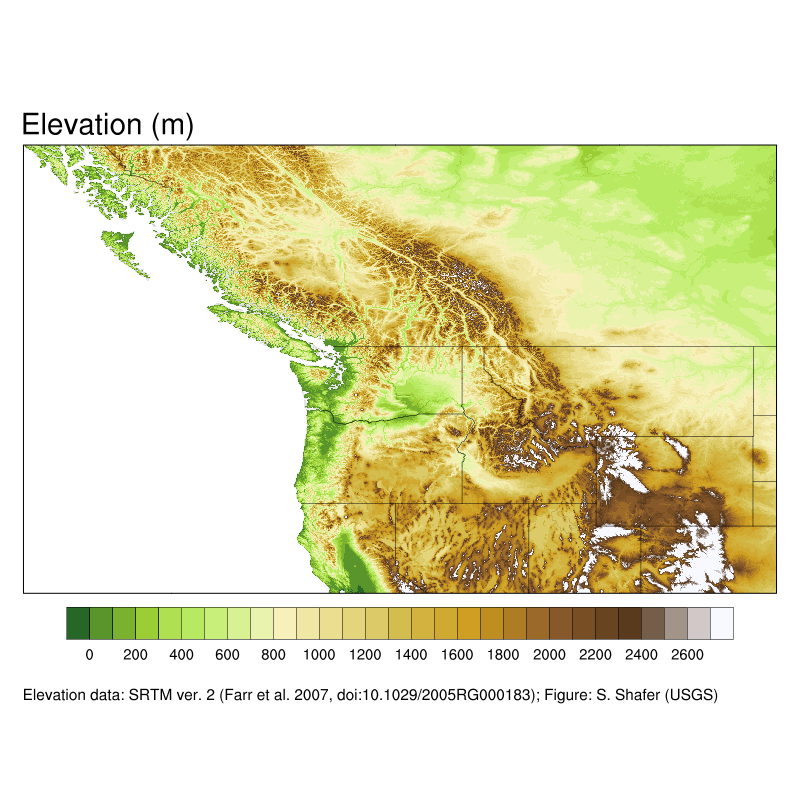 Publications using the downscaled potential future climate, bioclimate, and biome data should include the following acknowledgement:

“We acknowledge the modeling groups, the Program for Climate Model Diagnosis and Intercomparison (PCMDI) and the WCRP’s Working Group on Coupled Modelling (WGCM) for their roles in making available the WCRP CMIP3 multi-model dataset.  Support of this dataset is provided by the Office of Science, U.S. Department of Energy.” 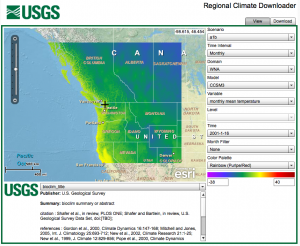 These data were developed for scientific research applications. Although they have been processed successfully on a computer system at the U.S. Geological Survey (USGS), no warranty expressed or implied is made regarding the display or utility of the data on any other system or for general or scientific purposes, nor shall the act of distribution constitute any such warranty. The USGS or the U.S. Government shall not be held liable for improper or incorrect use of the data described and/or contained herein. In addition, any use of trade, firm, or product names is for descriptive purposes only and does not imply endorsement by the U.S. Government.

This research was supported by the U.S. Geological Survey’s National Climate Change and Wildlife Science Center and Climate Research and Development Program. We acknowledge the modeling groups, the Program for Climate Model Diagnosis and Intercomparison (PCMDI) and the World Climate Research Programme’s (WCRP’s) Working Group on Coupled Modelling (WGCM) for their roles in making available the WCRP CMIP3 multi-model dataset. Support of the WCRP CMIP3 dataset is provided by the Office of Science, U.S. Department of Energy.